The lockdown has seen a sharp fall in the number of households switching electricity suppliers.

Although industry trade association Energy UK said the 29% year-on-year decrease was no surprise given people’s competing priorities at the moment, the figures are a disappointment given that more of us have had time to contemplate domestic chores such as trying to cut household bills.

It also comes at a time when home energy bills are going up simply because people are spending more time at home.

Nearly 475,000 customers switched suppliers during April, compared with nearly 670,000 in April last year. However, it’s worth bearing in mind that last year’s high number was a monthly record.

“It is certainly not surprising to see that switching energy supplier is not a top priority for most people while they are getting to grips with lockdown life,” said Energy UK interim chief executive Audrey Gallacher.

The latest figures bring the total number of switches to just over two million so far this year – 2% lower than during the same period last year.

Peter Earl, of Compare the Market, said: “Whilst it may sound impressive that almost half a million households switched energy supplier last month, this is marked drop from the number of households switching in the same month a year ago.

“Many people continue to face unprecedented challenges, and an increase in the amount of time people are spending at home has seen the average household pay £32 per month more for their energy than before lockdown.

“Furthermore, customers that rollover on to a supplier’s variable tariff can typically expect to pay more for their energy than if they were on a fixed deal. With the cheapest dual-fuel fixed tariff on the market more than £300 cheaper than the default energy price cap, shopping around online for a better value energy deal could save the average household hundreds of pounds a year.”

Ms Gallacher pointed out some of the other things that people can do to keep their energy bills down.

“As many of us might be looking at ways to save on our energy bills, as well as checking you are on the right deal for you, it is also important to consider energy-efficiency measures, especially if you are working from home and might have extra time on your hands,” she said.

“Simple steps such as installing energy-efficient lightbulbs and turning off lights when you are not using them, or minor DIY tasks such as draught-proofing doors and windows, can help you reduce the energy you use and save on your bill.” 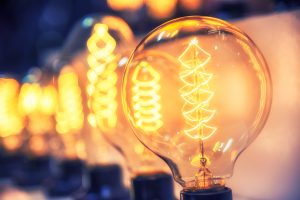