In the mad scramble today to save costs, maximize utility and gain competitive advantage, countless businesses and organizations are becoming more creative in the way in which they use and fill their – already limited – office space.

Remote-working, hot-desking, platform-sharing employees find themselves in the midst of one of the biggest revolutions to hit workplace planning since the removal of the booth and open-plan offices. In such a time, many things are new and fresh but also quite inefficient.

You tend to find in life that sometimes rapidly solving one problem leads to slow development of another elsewhere – increasing the number of workers in the building helps strengthen the impact of your business – yes but the way in which you do so may be adversely affecting the productivity of that same increased workforce.

Countless studies show that signs and demonstrations of overcrowding in the office prevent your workers from delivering at their maximum utility. Those not fortunate enough to have their own private office use time they could be working to find available areas to take calls, they take breaks in busy periods when noise levels are in excess and the stress of tolerating all senseless conversations within earshot as they try their best to perform meticulous tasks becomes overbearing.

Exactly how much time is spent hunting down a quiet space to work and take calls? How many resources are being used to coordinate all the extra steps you’ve used in order to exceed the capacity you’d have had otherwise? And what is the trade-off between extra bodies in the room versus the work they are actually able to do? Is it really worth it? Could you use a phone booth to aid your conversations?

It seems improbable to many as open plans offices are considered an airtight alternative, especially to senior management who aren’t always working on the ground floor. To them, these plans facilitate necessary communication across varying levels whilst enhancing the exchange of vital information throughout the company but it’s said the law of marginal returns always comes into play at some point.

It’s a universal law that the benefit of having one more person doesn’t make you more productive if their very presence renders them unable to function as they should (it’s basic economics).

Research reveals up to half of all workers in some organizations, with an open-plan office, feel disturbed by noise in their normal everyday tasks. Some are attributed to chatter amongst fellow colleagues but most are due to others on calls (prospects, suppliers etc.).

These perfectly normal and understandable conversations can reduce employee productivity by 15% (according to research quoted by the BBC). If we assumed ‘productivity’ to be the final step of your sales process and assumed Charles, your typical sales manager, has the potential to generate £200,000 worth of sales a year, then the general chit-chat and noise in your office would bring down his sales by £30,000 a year. Multiply that loss by how many sales managers you have in your organization to get the full picture. Charles’s Monday morning anecdote on his weekend bender could be costing you a fortune (Cheers Charles!). 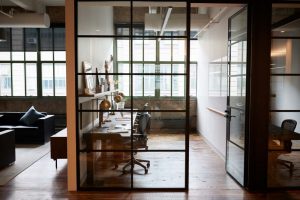 Or perhaps your organization holds 100 Theos. If every week, Theos spent an average of 5 minutes wandering around the office for a spot to make a call, as there are no soundproof booths in the office, that means 25,000 minutes/400 hours would be lost every year just from walking around the office (Thanks a lot Theo!).

Plus, it can lead to some serious tension and frustration among your colleagues and as we know, stressful environments in itself understandably do not always make for productive results, it is better to have a system where work can be done in peace, like a booth.

Popping in an office phone booth costs a lot less time, space and money. You get lower noise levels and space to comfortably take calls without others listening in. It’s a great space for Theo to use and a paradise away from Charles!