The government has been warned there could be a huge spike in the number of tenant evictions within a few weeks if it fails to amend the law.

In a joint letter from debt charity StepChange and housing campaign group Generation Rent. Housing secretary Robert Jenrick has been told that things could unravel quickly when the rental tenant evictions ban comes to an end on August 23.

When an extension to the temporary scheme was announced last month, Mr Jenrick said: “Eviction hearings will not be heard in courts until the end of August and no one will be evicted from their home this summer due to coronavirus.

“We are also working with the judiciary on proposals to ensure that when evictions proceedings do recommence, arrangements, including rules, are in place to assist the court in giving appropriate protections for those who have been particularly affected by coronavirus – including those tenants who have been shielding.”

But the two groups say the law should be tightened up to build on these sentiments before the scheme comes to an end, giving tenants more time to pay down arrears.

StepChange chief Phil Andrew said: “The coronavirus emergency has wreaked havoc on people’s finances – it’s not right that this turmoil should be accompanied by the threat of eviction. The knock-on consequences of debt and eviction can be severe for individuals and threaten to undermine the economic recovery for everyone. The government must act to prevent this.” 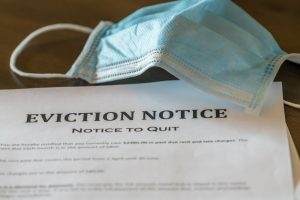 Generation Rent’s Alicia Kennedy said: “Over half a million households are behind on their rent and people are terrified about losing their homes. The government must prevent no-fault evictions or evictions for rent arrears built up during the pandemic.

“Renters urgently need reassurance that they will not lose their home due to the economic shock of coronavirus, as the government promised in March. The government must use the final days of parliament to ensure that no home is at risk.”