Fire doors are required when the law demands it, when your insurance company demands it, and when common sense demands it.

What is a fire escape route?

Even a single living abode should have planned escape routes that can be taken if the house is on fire. Every building, be it large or small, should have several escape routes. These are pre-planned escape paths. For example, in your house, your front and back doors may be used for escape, but your bathroom window may also be big enough to squeeze through. Your bedroom may have double glazing, but perhaps your bedroom has a heavy metal chair (or an axe) that can be used to break the window. An escape route is a pre-planned path that that gets people out of the building while putting them at as little risk as possible.

The law works mostly to protect fire escapes and escape routes. For example, fire doors are almost always required if you have a stairwell in a building with more than one owner (like a block of flats). This is because the assumption is that people will need to escape via the stairwell, and the fire doors will help hold the flames within the halls and/or rest of the building.

Imagine you are living in a series of ground-floor apartments and the fire escape route runs past your front door. In that case, you are required to have a fire doors so that the escape route remains operational for as long as possible.

Let’s say you have a small block of flats, and there is a door leading out into a communal hall, which leads to a stairwell. There is also a window with a ledge for each flat. Common sense escape routes are ones where a very infirm person may escape, or a parent carrying a toddler may escape.

From your perspective, a healthy person may escape by jumping out the window or by climbing on the roof and jumping to the next building. However, in reality, your fire escape plan cannot account for those possibilities. You would have to put in fire doors at every intersection where another room meets your intended fire escape route.

Fire safety is not the same as fire law

Having a perfectly fire-safe house and having a legally fire-safe house are different. For example, fire safety guidelines say you should have fire doors on every door upstairs on a two-storey house. But fire law may say you only have to have a fire door between your house and your attached garage. 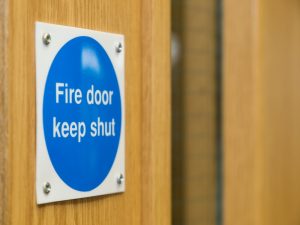 In short, if you own a domestic building (where you or other people live), then you “May” need fire doors. If you own any other type of building, then there is a very strong chance you “Need” fire doors.